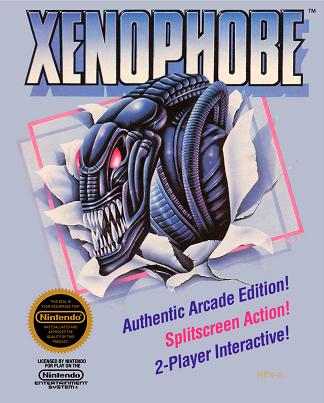 Xenophobe is a 1987 Arcade Game created by Bally Midway (the future Midway Games), later ported to consoles by Sunsoft. Three people can play at once, and the screen is divided horizontally into thirds. Each player controls a joystick with a trigger and two context-sensitive thumb buttons.

It involves one to three Space Marines, from a pool of nine, trying to collect valuable hardware and kill all the extraterrestrial monsters in each room before time runs out and a self-destruct mechanism goes off.