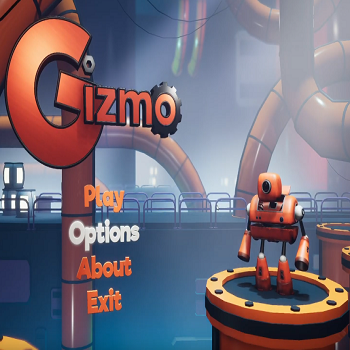 Greetings, bots! It's been thirty-five years since the humans went to sleep, and Operation Rebuilt-The-Planet began. Despite being a little overdue, I'm confident that you will PICK UP THE PACE!! And the project will be completed with out any disrups-(screen flickers off)
Dr. Bolt in the Cinematic Trailer

Gizmo is a 3D Platform Game by Dane Winn and Alec Smith. A single level of it was freely released for PC through Steam on December 5th, 2018, though its creators promise to eventually make a much larger, 25-level game out of it.

Many years ago, the entire human race was put to sleep, with the sole exception of the brilliant Dr. Bolt. In that time, he's built an army of robots to help him reconstruct the planet.

Thing is, they should have been finished long ago.

However, Dr. Bolt is confident that despite the setbacks, the project will be finished, and mankind will FINALLY be awakened. That's where Gizmo comes in. Gizmo must traverse Arctic Base 4, collect transmission beacons, and listen in on Dr. Bolt's broadcasts.