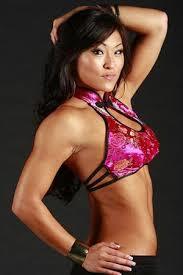 She tried out for the 2007 WWE Diva Search. Although she didn't make it to the finals, she was offered a developmental deal and trained at FCW. Reports started raving about her natural athleticism, comparing her favourably to the likes of fellow Canadian stars Trish Stratus and Gail Kim - and even saying she was on par with some Japanese woman wrestlers. Angela became the first Queen of FCW in 2005, defeating Alicia Fox in the finals. She was called up to TV as a backstage interviewer for ECW under the name Savannah, and later acted as a ring announcer. She was abruptly released from WWE in 2010.

Angela continued to wrestle on the independent circuit, becoming the first Ground-Breaking Ladies Pro Wrestling Champion. She eventually popped up in Lucha Underground portraying the character Black Lotus - a marked departure from her Genki Girl persona in WWE. She has stayed with the promotion since its inception.