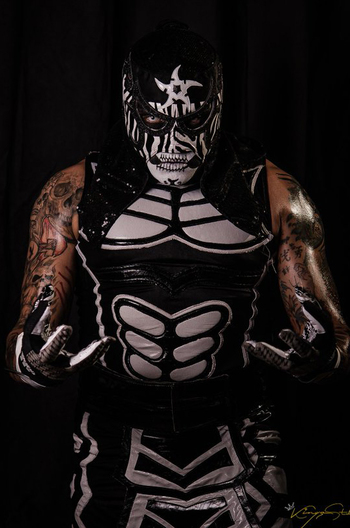 Pentagón Jr. (real name unknown, born February 26th 1986) is a Masked Luchador from Mexico City, Mexiconote Although born in Xalalpa, Veracruz, he grew up in Mexico City and is billed as being from there.

Following the Masked Luchador tradition of anonymity for Luchadores with masks, effectively nothing is known about his actual background except the little that he has chosen to divulge. As far as we know, starting out as a Jobber and mid-carder under varying aliases in AAA, first as "Zaius" and then as "Black Dragon". After languishing in the lower cards for a few years, he was eventually repackaged as "Pentagón Jr." in 2012. The Pentagón Gimmick was originally conceived as a Evil Twin to Luchador Octagón, and AAA brought it back because they had a very good Luchador whom they repackaged as Octagón Jr. Therefore, only logically, they created Pentagón Jr. to oppose him in a repeat of the original Octagón-Pentagón rivalry.

The Pentagón gimmick has a rocky history of bad luck: the first Pentagón had his career cut short after dying in the ring for a few minutes before being reanimated, and all subsequent Pentagón's (there have been 9 Pentagón and variant female/Mini Pentagóns, counting with Pentagón Jr.) were faced with misfortune in their careers. The legend thus became the gimmick was cursed, and in reaction to this Pentagón Jr. adopted his now iconic catchphrase "CERO MIEDO!" ("ZERO FEAR!") to demonstrate how little he thought of the alleged curse. The catchphrase became his creed and a fundamental aspect of his character and person, demonstrating his quest to live truly without fear of anyone or anything.

Almost as if following the trend of the curse, Octagón Jr. left AAA shortly thereafter in 2013, leaving Pentagón Jr. aimless and misused in AAA, causing him to leave the company in early 2017, claiming to be severely misused and thinking he deserved a bigger chance. However, Pentagón had proven his worth during this time as he achieved his big break in 2014 by way of nascent wrestling company Lucha Underground, a United Artists Media and AAA joint venture. Despite starting (yet again) as a mid-to-low carder, his sadistic and yet highly charismatic character, appearance and massive talent catapulted to the position of the flagship star of the entire promotion after season 1. While Lucha Underground eventually came to an end after four seasons in 2018, his tenure there lifted Pentagón Jr. to the status of one of the top Luchadores of The New '10s, effectively shattering the curse.

That firecracker of a run continued with him throughout the final years of the decade throughout championship runs in multiple companies including Impact Wrestling and CMLL as well as returning to AAA. Pentagón has arguably been considered the top Luchador heading into The New Twenties alongside Andrade "Cien" Almas and his own brother Rey Fénix. His ring name would also evolve, receiving such variations as Pentagón Dark and Penta El Cero Miedo (often written as 0M or Zero Miedo). Penta has also formed a tag team known as the Lucha Brothers with the aforementioned Fénix, also considered by many one of the best tag teams in the world.

He (alongside his brother) is currently signed to both AAA (since 2018) and All Elite Wrestling (since 2019), as well as making occasional appearances in smaller companies over North America and the world. And he still has zero fear.