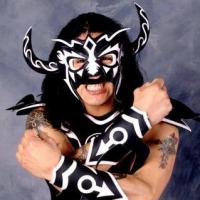 Dionicio Castellanos Torres (born May 19, 1971) is a Mexican Professional Wrestler best known for his work in the 1990s in Mexico, Japan, ECW and WCW as Psicosis. He started his career in 1989 as El Salvaje. He changed his name to Psicosis and began his epic feud with Rey Mysterio Jr.. He would compete for AAA (where he currently works) almost exclusively, while making a few appearances in New Japan Pro-Wrestling before he and Rey made their ECW debut at ECW Gangstas Paradise. He made his PPV debut at AAA When Worlds Collide teaming with Fuerza Guerrera and "Madonna's Boyfriend" Louie Spicolli in a win over Rey, Heavy Metal and Fuerza Guerrera.

He arrived in WCW in 1996 as Psychosis, debuting in a loss to Konnan at WCW Clash of the Champions XXXII on January 23. He continued his feud with Rey, making his WCW PPV debut in a loss to him at WCW Bash at the Beach, and also feuded with Último Dragón - unfortunately for Psychosis he never beat Misterio on PPV and never once beat Dragon during the feud note he'd defeat Dragon via DQ two years after the feud ended when Raven's Flock attacked him during a match. He had two reigns as WCW World Cruiserweight Champion

. For the second one, he was simply announced as champion due to GLAAD's protests over Lenny Lane, the previous champion, and his tag team partner Lodi's "West Hollywood Blondes" homosexual gimmick. Psicosis promptly lost the belt after the announcement to Disco Inferno.

WCW released him in early 2000 as the company was going through bad financial problems. He briefly returned to ECW where he had a famous and acclaimed match with Yoshihiro Tajiri that aired on ECW's syndicated show and was included on the ECW Deep Impact DVD. He would compete for WWAS, NWA-TNAnote he was one of the four participants in the match to determine the inaugural X Division Champion, All Japan Pro Wrestling, AAA's rival CMLL and other independents until arriving in WWE in 2005 as a member of The Mexicools with Juventud (Guerrera) and Super Crazy. The team would feud with the Blue World Order as well as challenge for the Cruiserweight Title. Psicosis was released in October 2006 and would briefly return to CMLL until he suffered a shattered nose in a match with El Hijo del Santo. He returned to AAA in 2007 and has been there ever since. He quietly retired in 2020 at the beginning of the COVID-19 pandemic.

Among his in-ring achievements, he is a former AAA World Tag Team Champion