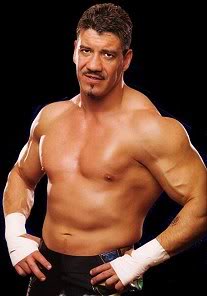 CAN YOU FEEL THE HEAT?
"In recent years, it seems, that being a great worker relegated you to a supporting role of being used to get over some green, untalented, and undeserving lug. Eddie Guererro, in direct opposition to that scenario, became a star because he was, simply put, one of the finest in-ring performers our sport has known."
—Shane Douglas eulogizes

Eduardo Gory Guerrero Llanes (October 9, 1967 – November 13, 2005) was a Mexican-American professional wrestler and a member of the venerable Guerrero wrestling family. He started out his career in childhood, as he and his nephew Chavo were allowed by his father, legendary promoter Gory Guerrero, to wrestle matches during intermissions. From there, Eddie launched into the family business headfirst.

(A little note: Eddie was the youngest of four brothers — so young, his nephew Chavo is only three years younger than him.)

Eddie's early exposure to wrestling audiences was limited to Mexico, as most of his formative years in the business were spent as part of CMLL and then the newly formed AAA promotion. He later had runs in New Japan Pro-Wrestling but it wasn't until the famous When Worlds Collide event - co-promoted and co-presented by WCW - where Guerrero was really exposed to an English speaking audience. At the event, he and partner Art Barr faced off against the team of Octagón and El Hijo del Santo in a Hair Versus Mask Match (Guerrero and Barr lost, and had their heads shaved).

Guerrero wrestled around the world for the next few years, traveling both to Japan (where he met up with Chris Benoit and Dean Malenko) and ECW, where he started to gain a foothold in the American wrestling industry. When he arrived in WCW, Guerrero was made a part of the promotion's now-legendary Cruiserweight division, delivering solid matches with just about everyone he faced (including longtime friend Rey Mysterio Jr.). It was in WCW that the seeds were sown for Guerrero's "Lie, Cheat and Steal" gimmick, as he pushed Chavo (who had also signed with WCW) into believing the mantra "Cheat 2 Win" (going so far as to force an unwilling Chavo to wear a shirt with the saying).

In early 2000, Guerrero was one of a group of wrestlers who jumped ship from WCW to the WWF in protest of Kevin Sullivan being put in charge of the promotion's booking; he was one of the first to become a standout singles star, too. Working his natural charisma, Eddie became known as "Latino Heat" and wooed Chyna, entering into both a relationship and a feud with the powerful Diva as they spent the next year in the Intercontinental Title hunt.

In 2001, Guerrero was released from the company after an arrest for drunk driving, which happened following his being sent to rehab months earlier. Facing the loss of his career and possibly his family, Eddie started at rock bottom and worked his way back up. Eddie cleaned himself up and spent the first few months of 2002 wrestling for independent promotions (including the debut show of Ring of Honor) before returning to WWE in April of 2002; by then, his nephew Chavo had signed with the company, and the two became a tag team, banking on Eddie's old "Cheat 2 Win" gimmick in WCW and turning it into their gimmick ("We lie, we cheat, and we steal...but at least we're honest about it"). "Lie, Cheat and Steal" became part of Eddie's repertoire for the remainder of his career, whether he was a face or a heel.

For the next two years, Eddie slowly climbed to the top of his profession, and at No Way Out 2004, Eddie hit the top when he defeated Brock Lesnar for the WWE Championship. He followed this up the next month at WrestleMania 20 by defeating Kurt Angle to retain the title, then joined Chris Benoit following HIS successful win of the World Heavyweight Championship in one of the most memorable images in wrestling history.

Over the next year-and-a-half, Eddie's career fluctuated from high to low: he helped build the credibility of John "Bradshaw" Layfield as a world champion over the summer of 2004, but he was also involved in one of the most tasteless and WrestleCrap-worthy feuds of all time as he feuded with Rey Mysterio over the custody of Mysterio's son Dominick (who, kayfabe, was revealed to actually be the biological son of Guerrero).

In November of 2005, Guerrero was closing in on another world title shot, and was scheduled to be a part of a Survivor Series Match featuring members of the SmackDown brand (which Eddie was a part of) going up against members of the Raw brand. Tragically, however, Guerrero died of heart failure two weeks prior to the event. The Monday and Friday following his death, WWE held two special tribute shows in the vein of the Owen Hart tribute show a few years earlier, in which storylines were thrown out the window and matches were put on for the sake of tribute.

This would normally be the end of the story, but pro wrestling has a way of dragging things out well past their expiration date; Eddie Guerrero's name was no different. Just weeks following his death, WWE began a campaign of what came to be known as "Eddiesploitation", where Guerrero's name and legacy were used in the most tasteless ways possible - from Randy Orton telling Rey Mysterio that Eddie was "in hell" to Mysterio acting as if he were receiving heavenly assistance from Eddie's spirt to Eddie's widow Vickie Guerrero becoming an on-screen character (who later grew into a surprisingly effective villainous manager/authority figure in her own right). Strangely, the "Eddiesploitation" period heavily pushed Rey Mysterio as Eddie's successor, while Chavo Guerrero was largely ignored (Chavo later revealed that he was originally offered the push, but he refused, so it went to Eddie's friend Mysterio). WrestleCrap gave this exploitation its annual Gooker Award in 2006, with RD Reynolds famously stating that while it was a necessary evil due to the site's mission, the induction was "the hardest induction he'd ever had to write".

Guerrero is fondly remembered to this day by fans as an excellent wrestler and a great human being. He was posthumously inducted into WWE Hall of Fame in 2006.

"Can you feel the tropes?":