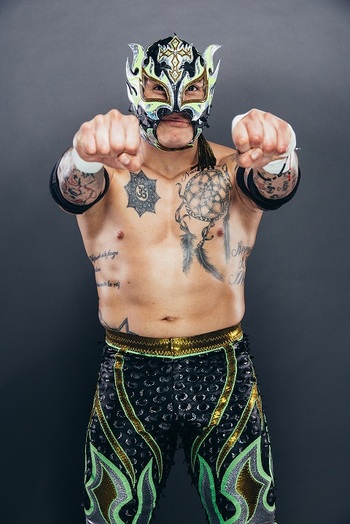 (Rey) Fénix (real name unknown, born December 30, 1990) is a Masked Luchador from Mexico City, Mexico and brother to Pentagón Jr., with whom he forms the Lucha Brothers. He is also unfamiliar with the concept of gravity, or at least you'll be convinced as much if you watch him wrestle.

Fénix made his professional debut at AAA in 2011, but it was only really at Lucha Underground that he became a household name, being known as "The Man Of a Thousand Lives" and one of the premiere faces of the promotion. Coincidentally, his brother Pentagón Jr. became the other breakout star of the promotion. Ever since, Fénix has been considered one of the best Luchadores in the world and the premiere high-flier of Mexico.

Once their LU days ended, Penta and Fenix joined forces as the Lucha Brothers and tore a path of lucha righteousness across indie promotions and big ones like CMLL, Impact and MLW before landing for good over at All Elite Wrestling in 2019. The Lucha Brothers have been considered by many one of the best tag teams in the world.

Fénix isn't named after a legendary winged bird for nothing: his wrestling style is defined by almost superhuman agility and capacity to take flight on a level comparable (maybe even superior) to Rey Mysterio. And once he gets moving, it's impossible to put him down. This is why he cries out: "Ánimo!", a spanish word meaning encouragement, life and perpetual movement.

Besides AAA and AEW, he (alongside his brother) makes occasional appearances in smaller companies over North America and the world. And he flies ever higher.