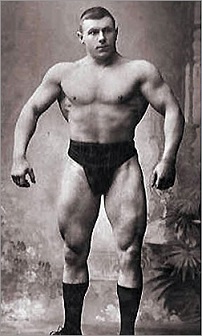 Georg Karl Julius Hackenschmidt (1 August [20 July in the Old Style calendar] 1877 – 19 February 1968)) was a Professional Wrestler, strongman, author and philosopher from Dorpat, Estonia, and was the first to be recognized as the World Heavyweight Champion

. This is the real and ORIGINAL version of the title, not to be confused with the Big Gold Belt formerly used in WWE. He started his career in 1896 and competed in tournaments all over Europe, all of which he won. He became the first recognized World Heavyweight Champion in 1905 and had his most famous rivalry with Frank Gotch. He retired in 1911 and passed away in 1968. He was inducted into the Wrestling Observer Newsletter Hall of Fame in 1996.