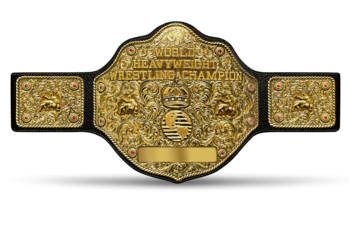 The Big Gold Belt is perhaps the most famous and recognizable championship belt design in professional wrestling history. It has represented the world heavyweight championship titles of NWA, WCW and WWE.

The original Big Gold Belt was made in 1985 by the Crumrine Belt Buckle company in Las Vegas, Nevada. It was dual-plated with gold and silver with faux rubies bordering the plates, which were placed on a brown leather strap (that would later be swapped out with a black one). The belt was awarded to then NWA World Heavyweight Champion Ric Flair in 1986, who also got a custom nameplate on the bottom portion of the belt.note this wasn't the first wrestling championship to feature the wrestler's name etched onto the belt, but after the Big Gold was introduced, it became the standard The belt would continue to be used when Jim Crockett Promotions was purchased by Ted Turner and turned into WCW.

After Flair left WCW in July of 1991, Flair maintained possession of the belt and refused to return it to WCW as then-Vice President Jim Herd had yet to pay back Flair's $25,000 deposit on itnote a deposit that NWA wrestlers were required to pay in order to hold the championship at the time which Flair claims was actually $38,000 after interest. Since WCW did not own the rights to the Big Gold Belt, Flair took it with him to WWF when he debuted for them in August of 1991 and declared himself the "real world champion" as a shot at both Hulk Hogan and Jim Herd. As a result, WCW was forced to strip Flair of his title reign and introduce a new world heavyweight championship belt

◊, that featured their logo all over, in order to avoid any more mishaps like this.

WCW and Flair eventually reached a settlement and both he and the belt returned to WCW in 1993, where it then became known as the WCW International World Heavyweight Championship, the world championship of a supposed subsidiary of WCW called "WCW International". In June of 1994, both the regular and International World Championships were unified and the Big Gold Belt once again represented WCW's top title and remained such until WCW was purchased by WWF in 2001 (though in mid-2000, the original belt would be replaced with a solid-gold plated cast copy due to wear and tear).

The WCW World Championship would appear on WWF television during the InVasion angle until it was unified with the WWF Championship to become the Undisputed WWF Championship and a new belt design was once again introduced in its place. However in August 2002, following the now WWE splitting its roster into two separate brands, a second world heavyweight championship was created and it used the Big Gold Belt design. In March of 2003, a WWE logo was added to the top of the center plate for trademark purposes.

For many years it was unknown what happened to the original belt following WCW's downfall, with some wrestlers such as Hulk Hogan and Scott Steiner either claiming or being rumored to possess the original (in reality, they only possess cast-copies). However, it belongs to an unknown collector (including the custom nameplate for Dusty Rhodes), who has created a Twitter account

by Dick Bourne and Dave Millican.