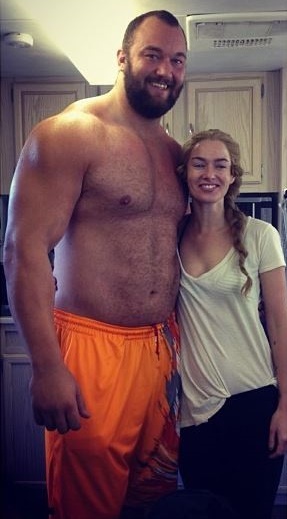 Someone else was needed on the picture for scale. (Headey is 5'5")
Advertisement:

Hafþór Júlíus "Thor" Björnssonnote He is properly referred to as "Hafþór". The vast majority of Icelanders (himself included) have no family names, instead using one or more given names followed by a patronymic (or in some cases matronymic). (born November 26, 1988 in Reykjavík) is an Icelandic professional strength athlete, actor and former professional basketball player.

He once had a shot at joining the NBA, until a knee injury brought an end to these dreams. Hafþór is famous for his huge stature (206 cm / 6 ft 9 in tall) and for his weightlifting feats, being one of the strongest men in the world (for instance, he holds two world records for deadlifts—1045 lb / 474 kg under Elephant Bar conditions, and 1104 lb / 501 kg under strongman conditions).note Strongman conditions allow the use of a deadlift suit and "figure 8" straps. Elephant Bar conditions ban both, but allow other types of straps.

Outside his physical prowess, he's famous for having played Ser Gregor "The Mountain" of House Clegane, the fearsome knight servant of House Lannister, in the HBO series Game of Thrones from the fourth season to the last.