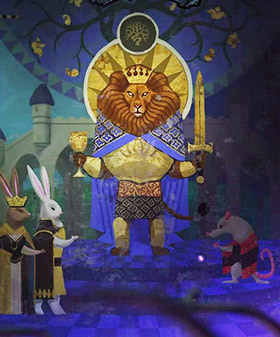 Atop the mane, there is a crown.
"He couldn't take it! King of the Beasts! Ha ha ha! Nero the Chicken-hearted! Ha ha ha!"
— Bugs Bunny (about Nero the Lion), "Acrobatty Bunny"
Advertisement:

Lions, with their huge manes and rather majestic appearance, have been considered the king of beasts since time immemorial. As with many cultural memes, this has found its way into fiction.

If exotic animals play a major part in a story, it's likely that lions will be in a position of power or authority. They might command all the other animals, or just the carnivores, or even just the felines. They might not have any real authority, but the other animals (except possibly other big cats) will pay them due respect.

Alternatively, if there's a group of different animal heroes, it's common to see a lion as The Hero or The Leader. This makes lions probably the biggest cultural exception to the Cats Are Mean stereotype (though they are quite prone to Good Is Not Nice).

Sometimes, this is portrayed as a profession (whether actually royal or not), especially in a World of Funny Animals. Like with the miner moles, firefighter Dalmatians, and semiaquatic animal sailors, lions are higher ups and in positions of power in political, corporate, and military professions.

Medieval bestiaries go further by declaring lions to pretty much be the animal equivalent of Jesus Christ: according to them, lion cubs are stillborn, but after three days the lion brings them to life by breathing on them.

The title "king of beasts" is often also rendered as "king of the jungle", even though lions live on the savannah, not in the jungle.note  Except for Indian lions, who as of writing only live in the Indian Gir forest. The fact that lions essentially never set foot in a jungle has done nothing to make this inaccurate version disappear. Though some quip that a lion can be the king of whatever he pleases, because are you going to argue with him?

See also Panthera Awesome, Cats Are Superior. Noble Bird of Prey often serves as an equivalent among birds. When you combine a lion (king of the beasts) and an eagle (king of the birds) in the same creature, you get Our Gryphons Are Different.

The head of the Beast-Keeper Coven with a strong resemblance to a lion.

The head of the Beast-Keeper Coven with a strong resemblance to a lion.