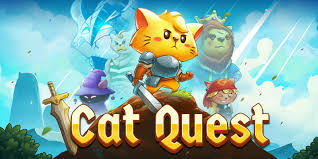 A pawsome adventure awaits!
Cat Quest is an open-world Action RPG by The Gentlebros. It was released on August 8th, 2017 for PC, August 9th, 2017 for iOS and Android, November 10th, 2017 for Nintendo Switch and November 14th, 2017 for Playstation 4.
Advertisement:

It features a cat adventuring to save their sister, who's been kidnapped (or rather, catnapped) by the Evil Sorcerer Drakoth. Along the way, they discovers that they are a Dragonblood, a race of cats thought extinct who can defeat dragons.

A sequel subtitled The Lupus Empire was released in Autumn 2019.