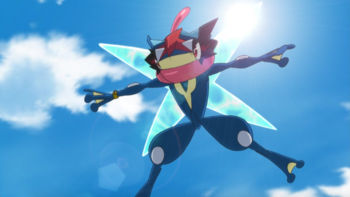 Even Pokémon have got it down.
Advertisement:

Aside from turtles, what animal would you associate with a ninja? A cat? A wolf? A dragon? A... frog? Odd choice, but okay.

Ever since the 19th century, ninjas and frogs (or toads) have been synonymous with each other over in Japan, in part due to the influence of the epic poem-turned-Kabuki show Jiraiya Gouketsu Monogatari ("The Tale of the Gallant Jiraiya").

This ninja is almost invariably a good guy, and exhibits some kind of amazing, or even supernatural abilities, such as summoning a giant frog, turning into one themselves, or even just being a frog already. Optional is to include an arch-enemy with snake powers.

While it would seem rather outlandish for a stealth-based profession to give itself frog motifs, literary influence or not, frogs are stealthier and quicker than most give them credit for. Consider the fact that frogs can catch flies, which perceive time 4x slower than us is a testament to its speed, but also patience. Also, frogs, especially aquatic ones that frequent water, are stalking predators that are able to sneak up on their prey. Their legs give them immense jumping power that allow them to pounce on their prey and back almost instantly.