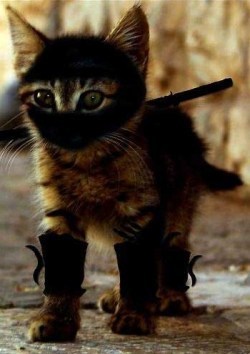 Cats in general have a reputation for being an adorable pet, as well as for being self-reliant, hunting down mice with either ruthless efficiency or sadistic pleasure, having nine lives, and trying to sneak around everywhere. Ninja are renowned for being masters of stealth, difficult to kill, and ruthlessly efficient or sadistically deadly assassins. Naturally, some works of fiction ignore the fact that cats tend to knock over household items and prefer to exaggerate their "stealthy" tendencies by turning felines into ninja.

Typically expect characters of this nature to be either Badass Adorable or Tall, Dark, and Handsome (if not some version of Evil Is Sexy). They may be an example of Cats Are Superior if they're portrayed as arrogant, or Cats Are Mean if they're antagonists.

These cats often have all-black fur due to ninjas being generally portrayed as wearing all-black outfits.

This need not apply solely to household cats; it is possible for some species of big cat, such as tigers or panthers, to be portrayed as ninjas - big cats are less common with Talking Animals, thanks to Rule of Cute, but may be more common with Animal Motifs, due to Rule of Cool.

Not related to With Catlike Tread or to Classy Cat-Burglar (although all three tropes reference cats as stealthy animals). See also Cats Are Superior, Cats Are Mean, Animal Stereotypes (generally the cause of ninja cats), and Good Animals, Evil Animals (when the cat ninjas are evil, often when they're black or Siamese). See also Female Feline, Male Mutt (in cases of overlap, you can usually expect a cat ninja and a dog bruiser).