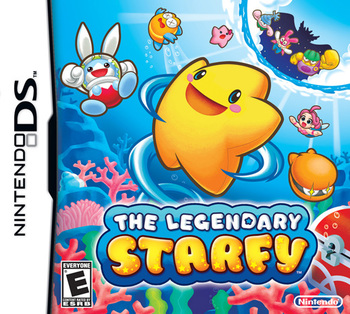 North American box art of the fifth game.
"High in the sky above the ocean... there was once a floating kingdom named Pufftop. The prince of Pufftop was named Starfy. He wasn't exactly like other princes. His head was always in the clouds!"
— Opening narration, The Legendary Starfy
Advertisement:

The Legendary Starfy is a series of mascot platformer videogames developed by TOSE and published by Nintendo. The main character is the titular Starfy (Stafy in Japan), a star prince who fell from his home in the heavens and landed in the ocean, and began to take on starfish-like characteristics. He is accompanied in his adventures by his bossy and more intelligent sister Starly (Stapy) and their Jerk with a Heart of Gold clam sidekick, Moe (Kyorosuke). Also featured often is Ruby (HadeHirari), the beautiful turkeyfish that Moe constantly obsesses over and Old Man Lobber (Lobjii-san), the elderly and wise lobster. The first three games in the series concerned Starfy's battles against Ogura, an evil genie (sometimes thought to be an eel) he accidentally unleashed. There have been two sequels each with their own stand-alone stories - 4 is about Starfy helping a princess from a neighboring kingdom repel an invasion and 5 is about Starfy protecting a space bunny from pirates.

In terms of gameplay, Starfy is very similar to the Kirby series, except most of the game takes place underwater, and thus has a greater focus on swimming. Starfy originally only started with a few basic moves, but has gathered many more abilities, power-ups, and ridable animal buddies as the series has went along.

Despite the popularity in Japan, the series wasn't localized in English-speaking countries for some time. The reasons suggested vary. Generally, the school of thought being that the stereotype of Americans hating cute things, or the games having unusually large amounts of dialogue for a children's platformer - almost every single stage has a storyline of its own, usually a fetch-quest for a friend of the level or something related to the plot. The official reason is that Nintendo thought the series was "too Japanese" to bring to America.

Since Super Smash Bros. Brawl, Starfy has appeared in Super Smash Bros. as an assist trophy and a regular trophy, as well as having characters in the series appear as Stickers in Brawl and Spirits in Ultimate. Starfy has also had cameos in fellow Nintendo titles Mario & Luigi: Superstar Saga and Super Princess Peach, the latter also developed by TOSE.