I'd Tell You, but Then I'd Have to Kill You 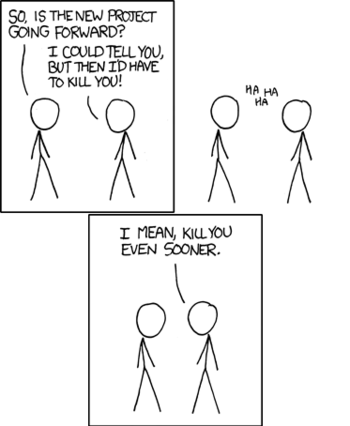 Doctor Frankland: Oh, Mr. Holmes, I would love to tell you, but then, of course, I'd have to kill you.
Sherlock: That would be tremendously ambitious of you.
— Sherlock, "The Hounds of Baskerville"
Advertisement:

Often heard in settings related to espionage and high security levels, the phrase "I'd tell you, but then I'd have to kill you" is itself probably a Dead Horse Trope by this point - whether for a serious straight use or not.

Nowadays used much more tongue in cheek to poke fun at stern security protocols and classification, it has started to show signs of decay since it's hard to pass off a Stock Phrase as an original joke. Instead it's more common to get it as one character's joke to another, perhaps to demonstrate that character's lack of regard to the rigmarole of secrecy or mockery of the other character's clearance/understanding.

A common modern comedy subversion is to have one character say the phrase to another with the response "So it's classified?" they then answer "no, I just feel like killing you."

Compare Just Between You and Me, in which a Big Bad tells the hero something they shouldn't before they attempt to kill them.

Alternative Title(s): But Then Id Have To Kill You