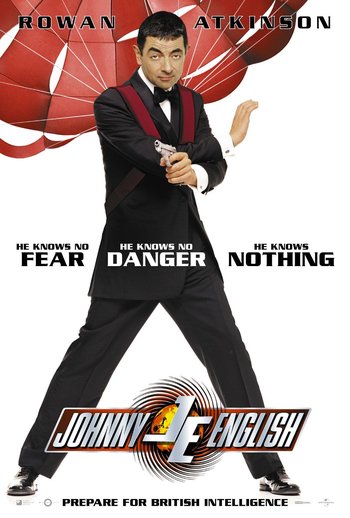 When it comes to secret agents, there's the smooth, there's the sophisticated... and there's Johnny English.
Pegasus: English, we can't afford any mistakes. Not tonight.
English: The word "mistake", Sir, is not one that appears in my dictionary.
Advertisement:

Johnny English is a comedy film that was released on 11 April 2003, and directed by Peter Howitt. The movie is considered an Affectionate Parody of the spy movie genre, oftentimes hanging lampshades on several popular spy tropes, from Disposable Love Interest characters to the protagonist being an overwhelmingly confident and suave badass. It features a hearty plateful of the Rule of Funny, a nice smattering of slapstick, and even a light pinch of Self-Deprecation. And Rowan Atkinson.

The story begins when Corrupt Corporate Executive/Big Bad Pascal Sauvage, sets in motion a complex plan, starting with the assassinations of all the spies in Britain with a bomb planted at a funeral. Fortunately, the eponymous Clueless Detective-style Idiot Hero was a safe distance away, so now he finds himself promoted from a cheap low level agent to Designated Hero!

Johnny soon finds himself drawn into Sauvage's scheme and vows to stop him and save Britain, though he doesn't necessarily end up achieving a huge amount in the end via his own personal effort alone. He teams up with a semi-Butt-Monkey Hyper-Competent Sidekick Bough, and together, they form a unique team similar to the Straight Man and Wise Guy, only with levels of competence instead of seriousness. Oftentimes Johnny's juggling act with the Idiot Ball gets Bough, himself, or both of them, into troublesome or injurious situations, causing hilarity or reality to ensue.

The idea for the movie came from Atkinson's Barclaycard commercials from the 1990's about the misadventures of a (slightly) more competent, somewhat smug agent Richard Latham who scoffed at his Hypercompetent Sidekick Boff when the latter invariably solved each problem using his Barclaycard. About the only thing it has in common with the movies is that both characters worked for the fictional MI7 and are played by Rowan Atkinson. You can watch them here.

"A good agent doesn't need gadgets. The only gadgets I've ever needed are a sharp eye, sensitive hearing and a whole bunch of bigger brains."
Feedback

Johnny exploits this trope to cover up his mistake of knocking out who he thought was an intruder.

Johnny exploits this trope to cover up his mistake of knocking out who he thought was an intruder.