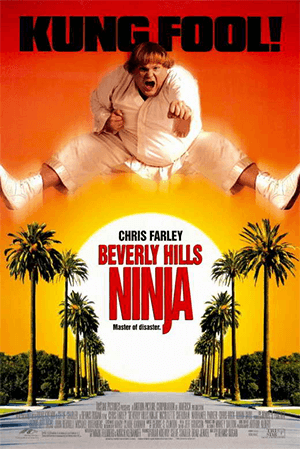 "I have come many miles and now have traveled, disguised as a pimp to help you!"
"Twenty five years ago, an ancient legend of this sacred art came alive. It spoke of a foreign child who would come among us and become a Ninja master unlike any other. How he arrived on our shores will forever remain a mystery. We Ninjas thought that this child would be the great white Ninja of the legend. We were wrong. We were very wrong."
— The Sensei
Advertisement:

Beverly Hills Ninja is a 1997 comedy film starring Chris Farley and Chris Rock. It is a parody of the American Ninja film series and the Beverly Hills Cop franchise.

Haru is a white man raised by a Ninja clan in Japan, after he was found as a baby on a shipwreck. They believed he might be the "White Ninja" prophesied by their legends, a foreigner who would grow up to become their greatest member. However, Haru grows up to become both clumsy and clueless. Although disappointed in him, his clan still loves him like one of their own. In turn Haru idolizes Gobei (Robin Shou), his "older brother" and the best Ninja of the clan.

One night, while the rest of the Clan is away, their Dojo is visited by a beautiful woman named Sally (Nicolette Sheridan) who wants to hire a Ninja to spy on her businessman boyfriend, whom she suspects is involved in shady deals. Haru, taken in by her beauty, tells her he is a full Ninja (he hasn't actually graduated yet) and goes on the mission. It turns out that her lover is indeed a criminal, involved with the Yakuza in an international counterfeiting scheme- and a cold-blooded killer to boot. Obsessed with protecting Sally, he decides to go to Beverly Hills to find her. Unknown to him, Gobei is following him, and keeping him out of danger without his noticing.

In Beverly Hills, Haru meets Joey Washington (Rock) a hotel employee who, realizing that Haru is a ninja, begs him to be trained as one and helps him get around. Eventually Haru meets Sally again and, after several madcap events, finally confronts the criminals. When he finds out Gobei is in danger, he spontaneously develops full Ninja powers and rescues him and defeats the bad guys. In the end, Haru, now declared a full Ninja by his clan, decides to stay in Beverly Hills (with Sally) though he proves to still be an accidental threat to people around him.

This was Farley's last film to be released during his lifetime. His last starring role, Almost Heroes, was released posthumously a year later.