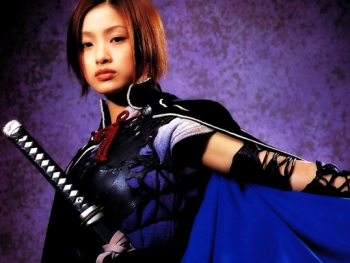 Azumi (2003) is an extremely violent action movie by Ryuhei Kitamura, based on a manga series created by Yū Koyama, focusing on the life of Azumi, a young woman brought up as part of a team of assassins charged with killing three warlords that threaten Feudal Japan with an agenda of war and bloodshed. It begins an indeterminate number of years after the Battle of Sekigahara, but as the story progresses and Azumi begins her missions, the manga introduces the characters into mainstream history. Many of the early assassination missions that Azumi undertakes are the assassinations of the prominent supporters and generals of the Toyotomi Clan, against whom the Tokugawa Clan expected to again go to war. The manga 'reveals' that many of the Toyotomi leaders who conveniently died of diseases or accidents prior to the final confrontation between the Toyotomi and Tokugawa were actually victims of assassinations by Azumi and her comrades.

In 2005, a sequel was made, Azumi 2: Death or Love, featuring Chiaki Kuriyama of Kill Bill fame and co-written by cult anime director Yoshiaki Kawajiri.