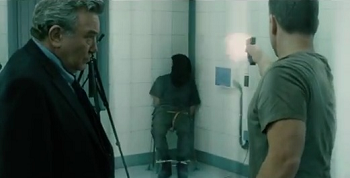 "Fully commit yourself to this program."

A classic for evil training programs, especially for assassins. Relatively good and innocent characters are trained in combat skills in a harsh and often deadly program. Often they are made to train in pairs for years building reliance on their partner. Now it is time for their final test. They must battle their best friend to the death!

A variation on this is the character's partner goes missing shortly before this mysterious exam only to be found tied up in the exam room with the test being to shoot them in cold blood. This can often end with the more talented best friend throwing the exam and sacrificing themselves in order to save their friend's life/any innocence he has left.

Occasionally, it is a Secret Test of Character, in one of two ways. Either you're not supposed to Shoot Your Mate, or you ARE but the gun is loaded with blanks. The Target will sometimes be an animal (almost always a dog), but this is not the same thing as Shoot the Dog, though they could overlap if an undercover Pragmatic Hero is taking the test.

Sub-Trope of Involuntary Battle to the Death. See also Tested on Humans. For a test of ruthlessness outside of training see If You're So Evil, Eat This Kitten.

There are of course countless variations of that joke, from CIA recruitment to SAS training, and from strangling to Pistol-Whipping to beating him to death with his chair...