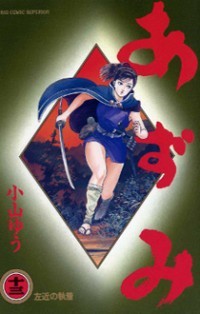 Azumi is a manga series created by Yū Koyama that ran from 1994 to 2009, starring a young kunoichi living during the early Edo Period.

The early part of the manga shows her as the sole girl in a group of ten war orphans - all boys - being trained as assassins by Gessai Obata, an elderly man they only know as Grandfather. When he deems them ready to graduate, Grandfather has them pair off with their closest friends... and fight to the death. Following that, Grandfather sends the five survivors, Azumi included, on missions to assassinate the vassals and supporters of the Toyotomi Clan, who oppose the newly-established Tokugawa shogunate and threaten to drag Japan back into civil war. And it only gets darker from there on out, as she starts to question the validity of her mission.

The manga won an Excellence Prize at the 1997 Japan Media Arts Festival and the Shogakukan Manga Award in 1998, and received two film adaptations: Azumi in 2003 and Azumi 2: Death or Love in 2006. It also received a Hack and Slash PlayStation 2 game adaptation in 2005, also called Azumi.

The author also created a Sequel Series with the same title, but written in all-caps Latin letters - AZUMI - which ran from 2009 to 2014. It takes place two centuries later during the Bakumatsu Period, following a different though similar-looking Azumi.