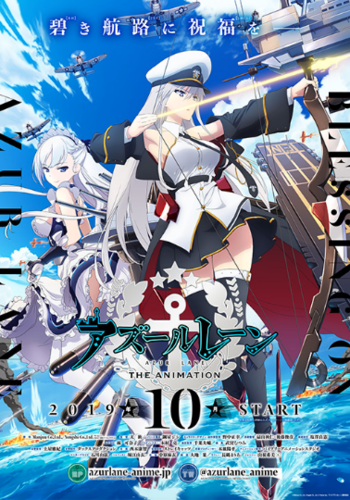 Azur Lane: The Animation is an anime adaptation based on the Azur Lane game. It is directed by Tensho and animated by Tensho's Bibury Animation Studio. The series aired from October 3, 2019 to March 20, 2020.

When the Earth's oceans are attacked by a mysterious alien force called the Sirens, four major nations, Eagle Union, the Royal Navy, the Sakura Empire, and the Ironblood form the "Azur Lane" military alliance to combat the Sirens using shipgirls, girls fused with naval warships. Eventually, the Sirens are defeated, but a rift forms between the factions, with the Eagle Union and Royal Navy coming in opposition against the Sakura Empire and Ironblood, where the former factions wished to use humanity's own strength to defeat the Sirens as opposed to the latter factions' willingness to use the Sirens' own technology to defeat the Sirens.