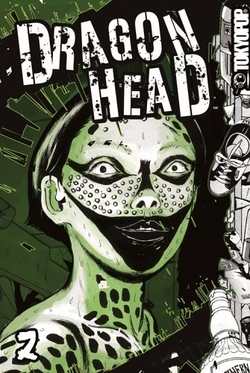 Teru Aoki is returning with his classmates from a school trip when he sees a weird beam of light in the distance. The train passes into a tunnel just before an earthquake hits. Teru manages to survive, but everyone else in his car is killed. When he escapes the car to explore, he finds two other survivors — Ako Seto, an unconscious girl, and Nobuo Takahashi, who is rapidly degenerating into insanity and claiming that he sees 'something' in the darkness in the tunnel. Both ends of the tunnel are also blocked, and the whole thing is getting steadily hotter for no apparent reason.

As the story continues, Teru and Ako have to deal with Nobuo and escape the tunnel into the outer world... which they find is almost completely destroyed by some mysterious cataclysm. Cities are abandoned, there's no edible food or drink, and the sky is obscured by a thick cloud of ash which makes navigation and travel nearly impossible. The two run into a few other survivors, including a teenage cult, deserting soldiers (who note that the military is completely unable to cope with the disaster), and the Dragon Heads — people with scars on their heads, who seem to be completely unable to feel any fear, even given the disastrous surroundings. Teru and Ako only want to return to Tokyo to find their families, and maybe figure out what happened, but the route to Tokyo is a long and torturous one, and the survivors they meet along the way aren't necessarily any more stable than Nobuo.

The series is largely a meditation on the nature of fear and the proper way to react to it. Nobuo and the cultists react by completely surrendering to their fear, which results in disaster. The surviving inhabitants of Izu peninsula, on the other hand, ignore their fear of death and decide on mass suicide, and Tokyo survivors wind up eating drugged food that suppresses their fear — and end up self-mutilating in desperation so they can feel something. Teru tries to feel fear without giving into it, but given the circumstances, is that even possible?