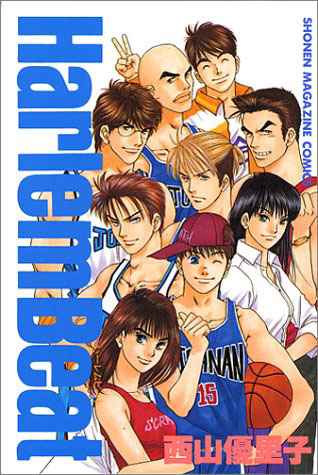 Harlem Beat (ハーレム・ビート, Hāremu Biito) is a basketball manga by Nishiyama Yuriko, known in U.S as “Harlem Beat” from volume 1-9 and “Rebound” from volume 10-29. It was serialized in Weekly Shonen Magazine from 1994 to 2000.

Nate Torres (Naruse “Narucho” Tohru in the Japanese version) just wanted to be someone; he tried on basketball club only to find himself ended up as a mere benchwarmer. A chance meeting with his Childhood Friends Kusuda Mizuki brought him to the world of streetball, and after his unexpected win against famous streetball player Shu, Naruse renewed his resolve to be a basketball player. Along the way he met Ozaki Kosuke and Sawamura Masahiro, and then together with Mizuki, the four of them formed a streetball team named Scratch.

Nate’s progressions as basketball player proved to be a great asset to his high school team, Johnan. With supports of Sakurai Shuuji, his senpai; Yabe Kiriko and Imagawa Kiyoshi, the team managers; Umakure Hiroaki, team captain; Kobayashi Sumisugu, and other members of the team, Nate tackled the world of high school basketball and continued to mature as a player.

Not to be confused with Harlem Beat wa Yoake Made by Kazusa Takashima.