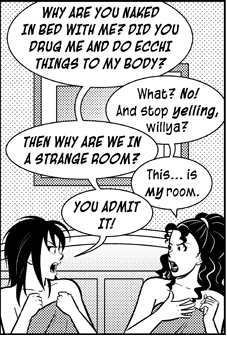 And yet, things still seem to have gotten a bit ecchi.
Fanservice is found in many anime, in many forms. When it appears to be a major focus of the show, then it's safe to assume you're watching Ecchi.
Advertisement:

Due to its dependency on fanservice and sex-orientated-humor: the focus is generally the females, which leaves the protagonist to be a stale, faceless camera to capture all of the escapades and shenanigans going around him.

Note that display of nipples alone is not sufficient to be considered Ecchi. Shows exist that aren't focused on sexuality, but will show the occasional bare breast. Like Europe, Japan is also a bit more relaxed about displaying breasts on regulated TV than America, but typically does not show such content in most of its shows. In America, display of nipples means you are either watching something on pay TV such as HBO, or something completely off TV altogether.