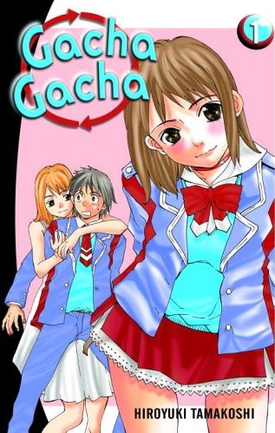 Gacha Gacha (referred to as Gachax2 in the series every now and then) is a comedy Ecchi Manga series by the creator of Boys Be... that currently has two story arcs; Capsule and Secret (Also known as "New Revolution").

Capsule follows the life of Kouhei and Clara, childhood friends. When Clara starts acting strangely, displaying a totally new personality one moment, then changing back with no memory. It's up to Kouhei to protect Clara from her other personas.

Secret picks up at an undisclosed time after Capsule's finale and stars Hatsushiba Akira, a hapless young man whose fallen for Sakuraba Yurika. When a freak accident causes Hatsushiba to become a girl whenever he sneezes, he uses this as a means of getting close to Yurika, and soons developes a relationship as "Akira-chan" and his real self.

Despite being obviously perverted, with plenty of pantyshots, upskirts, and other forms of fanservice, both feature fairly fleshed out stories and likeable characters. Both feature hapless fellows as they struggle to win the hearts of their respective Love Interest, with both being tied by the titular virtual reality machine, Gachax2.

The series features the following tropes