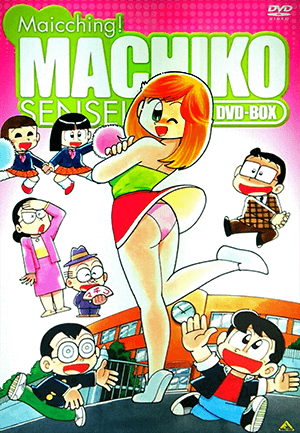 Shameful!
"New science teacher, Machiko Mai, is a young and attractive woman with healthy mind and body. Being around her makes everyone happy. Students like to play practical jokes on her, but no matter how many times they cause troubles, she does not get upset. She always tries hard to understand her students."
— Studio Pierrot's description of the series
Advertisement:

Miss Machiko (Maicching! Machiko-sensei) is a series that could be best described as a loose compilation of Fanservice or Ecchi, starring a female schoolteacher and her pervy students. The manga, created by Takeshi Ebihara, was serialized in Shonen Challenge from 1980 to 1982, and compiled into eight volumes. The anime adaptation was produced by Studio Pierrot (which was animating mega-hit Urusei Yatsura and kids' adventure series The Mysterious Cities of Gold at the same time) and aired from October 1981 to October 1983 in Japan as a kids' show. Given its blatant sexual content while airing in a "family" timeslot, it naturally ran into trouble with the PTA (who get called out in the show at least once). Despite this, it managed to survive for 95 episodes on TV Tokyo. Later on, the series spawned half a dozen live-action movies.

Machiko Mai, a talented young woman fresh out of grad school, lands a job as the new science teacher at Arama Academy, a Japanese junior high school. Unfortunately (for her), Machiko's students, led by resident troublemaker Kenta, think it's utterly hilarious to grope her, flip her skirt, or find new and exciting ways to get rid of her clothing. Even worse, the very universe itself seems to think it's funny too – despite her best efforts, almost every adventure ends up with her at least slightly humiliated (i.e.: stripped to her bare pantsu if not completely naked). Two of her coworkers also take it upon themselves to pursue her. However, Machiko proves on multiple occasions she can easily turn the tables on anyone who messes with her or her students.

Discotek Media licensed the series for streaming on Crunchyroll in 2016 (under the title of Miss Machiko), on which the first 45 episodes were posted in batches every few months through January 2017. Releases of episode batches became more sporadic after that, but the final few episodes finally went up on Crunchyroll in May 2019. Not long afterwards, Discotek announced the series would be released in a Standard-Definition Blu-ray set.