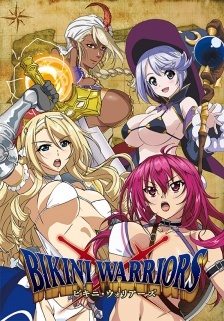 Bikini Warriors is a series of figures of girls role playing as fantasy classes created by Hobby Japan. Each of the characters are designed by various artists. A 12 episode anime series aired from July 7 to September 22, 2015, starring a group of these characters, Fighter, Mage, Paladin, and Dark Elf, as they set out on a quest to defeat the Demon Lord Deathgeld and his many minions. Oh, and they're all wearing bikinis. An OVA was released on December 19, 2015 and two more were released on December 7, 2016.

A manga was released online. A video game has also been confirmed to be in the making.