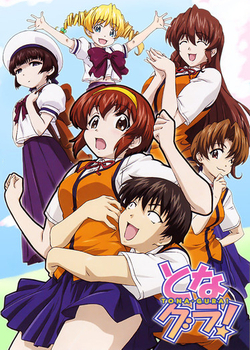 Kazuki Arisaka remembers her childhood friend, Yuuji Kagura, very fondly. When she and her older sister Hatsune learn that Yuuji and his younger sister Marie are moving back next door after 10 years, she is delighted. That delight quickly fades when she realizes that her friend and crush is now a blatant pervert, and his little sister is a machine-gun-toting maniac, tasked with keeping her brother in line (with paint balls, and on occasion, smoke bombs). Hatsune still wants the two to hook up, an idea that revolts Kazuki, but are things as simple as Kazuki believes? Is her friend still inside the hyper-active bag of teen hormones called Yuuji?

The series comes off a bit like Love Hina with some roles and motives switched, and the mystic elements removed. But with a trimmed-down cast and the same basic settings throughout, it works on its own, and no one is so perfect as to not see at least a chapter or three where things don't go their way. If you want an anime wherein the guy arguably deserves his beating but is still someone you'd want to be around, and where the girl is not so Tsundere as to wonder where the attraction is, this may be your cup of tea.