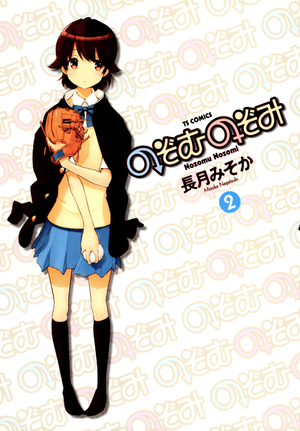 Poor Tao Nozomu. He's an androgynous late bloomer who's constantly teased for his girly looks, and it sure doesn't help that he and the rest of his middle school baseball team are forced to dress as cheerleaders and cheer for their rivals as punishment for losing a big game. It's all very embarrassing, especially since his crush, Cute Sports Club Manager and Cool Big Sis Yuka Ide, seems to have taken a particular interest in making him look "cute" for the occasion. Unfortunately, she does a good enough job that people actually mistake him for a girl. And it only gets worse when he looks at himself wearing Ide's clothing and realizes to his horror that he's just found something he may like even more than baseball.
Advertisement:

And so begins his new interest in crossdressing, which takes an even stranger turn when his body spontaneously transforms into that of a girl after his father nearly catches him wearing his little sister's clothing. Now he has two things to hide, and if hiding his new interests and anatomy from his family and friends wasn't enough, he's finally hitting puberty, just like all of the other boys on the team... only the changes he's experiencing, like wider hips and bigger breasts, are not the same changes they're going through, and not likely to improve his baseball skills, either. In fact they just might give the whole game away.

A lighthearted Ecchi Gender Bender story which nonetheless manages to play around with relatable themes of teenage gender identity, puberty, and sexuality, Nozomu Nozomi is a short full-color manga consisting of about 15 chapters in two volumes.

In order to acknowledge the fact that Nozomu spends most of his Gender Bender experience thinking of himself as a boy trapped in a girl's body, we will refer to him using the pronoun "he" in our examples under the premise that it is more accurate to refer to someone by their self-identified gender rather than something as relatively incidental to personality as the anatomical or biological nature of their body at any given moment.Exception (spoilers) the very end of the manga, when Nozomu makes a conscious choice to start thinking of herself as a girl in self-image as well as in outward appearance.