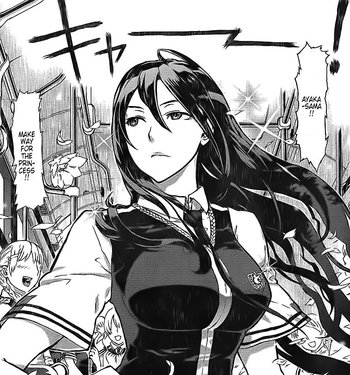 "The blackness of my hair tells you what I feel about your opinion."
"[Kirsten] is a stunningly beautiful woman with dark hair and a fierceness that's both scary and inspiring."
— Harper, Set It Up
Advertisement:

The Aloof Dark-Haired Girl is a fairly common character type combining both appearance and personality. She will generally be taller than her peers, more physically developed, and her hair will be very long and dark. Frequently, her skin will in contrast be very pale. She looks older and more beautiful and meets a certain classic ideal of feminine beauty combining maturity, a quiet attitude, and a combination of long hair and very pale skin.

The Aloof Dark-Haired Girl will not merely look older than her peers, however. Frequently, she will also act more reserved and aloof and thus seem more mature, which may earn her some younger female admirers. It is not uncommon for her to be fond of teasing her peers or acting as their big sister, though in all cases she will still maintain her dignity. Occasionally, she will even look cold and distant, but in this case, she is still probably a nice person deep down. Finally, it is essential to remember that despite the usual popularity of the girl in question, she does not seek it out. Instead, people simply gravitate towards her with admiration.

See Tall, Dark, and Handsome for the Spear Counterpart. Compare Onee-sama and Eerie Pale-Skinned Brunette. May lead to Even the Girls Want Her in the right sort of series.