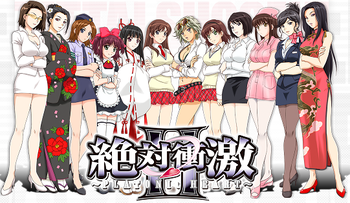 Aya Iseshima is a schoolgirl who ends up walking into a brutal battle between a Miko and a flight attendant. After saving the Miko with her kung fu skills that her mother taught her, Aya learns from both her friend and the Miko (coincidentally named Miko) the story of the "Platonic Heart", a mythical jewel that can supposedly grant any wish to a girl who acquires it. Miko further says that she found herself entered into a tournament to acquire the Platonic Heart with a cell phone text message from an unknown source.

After saying goodbye, Aya then receives a similar text message saying that she has been entered into the tournament in place of Miko, and so begins her reluctant quest to defeat a handful of cosplay-themed Action Girls including the aforementioned flight attendant, a nurse, a policewoman and more. With clothes-destroying physics and kung fu skills at her disposal, can she overcome her opponents or will she fall into an inescapable world of darkness?

You can either think of it as a streamlined version of Ikki Tousen, without the thin veil of a Romance of the Three Kingdoms plot behind it. Or, as a really bad imitation of Variable Geo.

This work displays examples of: