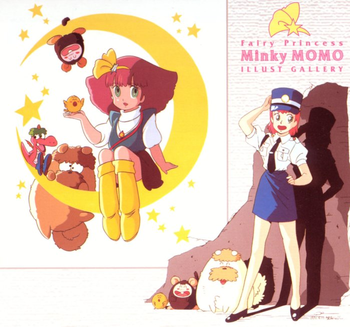 Momo as a pre-teen, and as an 18-year-old.
Love Love Minky Momo, onegai kiite...
Advertisement:

Magical Princess Minky Momo is a classic Magical Girl franchise that began with a 1982 anime and includes a manga series, several OVA specials, a feature film, a follow-up anime series in 1991, and a 30th anniversary stage musical. Known internationally as Gigi, the anime became popular in France, Italy and Latin America, but had never gotten an official American release outside of a heavily altered version of the film until 2015, when William Winckler Productions acquired Harmony Gold's Minky Momo series and made it into several Amazon Instant Video-exclusive compilation movies. note The first 52 episodes of the original series had been translated by Harmony Gold under the title "The Magical World of Gigi", but did not manage to net a TV deal in the US

and were instead used as the basis for several international adaptations bearing the Gigi name. The English dub did briefly air in Australia through 1986

-1988, but never saw home video release. It's been reported the English version aired in other countries as well, such as Israel and The Bahamas.

Though often overlooked outside of Japan, Minky Momo is among the most influential anime in its genre. It was also one of the first magical girl series not made by Toei Animation, which had heretofore virtually owned the genre since the late 1960s, and one of the first to air on a channel that wasn't TV Asahi (the '80s series aired on TV Tokyo, the '90s series on Nippon TV). It's had some retroactive recognition in the West for being an early team-up between director Kunihiko Yuyama and head writer/creator Takeshi Shudō, who would go on to make Pokémon together.

In the 1982 anime, the magical land of Fenarinarsa is where the characters of humanity's fairy tales dwell. But as humans lose touch with their dreams, Fenarinarsa is in danger of disappearing. To prevent that, the king and queen send their 12-year-old daughter Momo to Earth, tasking her with reviving the hopes and dreams of mankind.

Momo manifests on Earth as the daughter of a young childless couple who run a pet store and care center. Momo brings along her dog Shindobook, her monkey Mocha and her bird Pipiru. The Minky Stick in her pendant gives her the power to transform into an adult version of herself, complete with whichever skill set and outfit are appropriate for the situation at hand (nurse, police officer, etc.). The skill level she recieves is equal to the best human alive at whatever skillset her transformation requires.

Every time Momo succeeds in bringing happiness to a given person, a new jewel appears in the Fenarinarsa crown. Once the crown has 12 jewels, Fenarinarsa will return to Earth's surface.

In 1985, the movie La Ronde in my dream was released. Though usually considered an OVA, La Ronde was given a theatrical premiere. The story takes place sometime before Episode 46 of the first series and sees Momo on an adventure to rescue her parents after their airplane crash lands on a mysterious island. Adapted to English as Magical Princess Gigi and the Fountain of Youth.

A follow-up series was made in 1991, Magical Princess Minky Momo: Hold on to Your Dreams (魔法のプリンセス ミンキー モモ: 夢を抱きしめて), which follows a new Minky Momo from the undersea dream kingdom Marinarsa. This Momo also lives with human foster parents and three pets, but is not limited in her transformations and can become nearly anything, and she also has the ability to cast spells. This series is not an alternate continuity, and the two Momos even meet up on several occasions.

The last Minky Momo anime were the 1993 OVA The Bridge Over Dreams and the 1994 OVA The Station of Your Memories, both of which take place after the end of the second series and have a decidedly wistful tone.