Manga / Made in Abyss 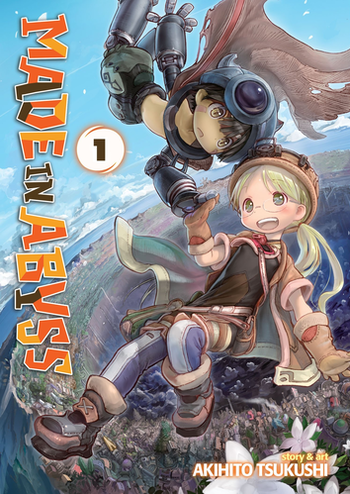 Made In Abyss is a Seinen adventure manga by Akihito Tsukushi, serialized via Takeshobo's digital publication Web Comic Gamma. So despite the cutesy looks of the main characters, don't be fooled for even a second.

The story follows Riko, an orphan who dreams of becoming a great cave raider, much like her mother, and solving the mystery of the Abyss. The Abyss is an unexplored enormous cave system inhabited by strange and wonderful creatures, along with mysterious artifacts. Generations of bold adventurers have been drawn by the cryptic depths of the Abyss, and over time came to be known as "Cave Raiders". Much of the Abyss remains shrouded in mystery, not only because of how the wildlife gets increasingly hostile and dangerous as one descends further down, but also because of "the Curse of the Abyss", a strange affliction that strikes anyone who tries to return to the surface after exploring the Abyss; the severity of said "curse" varies upon how deep one goes into the depths, from nausea and dizziness on the upper layers, to spontaneous bleeding from every orifice, unconsciousness, madness, and strange mutations on deeper layers, to the point where, as far as everyone knows, trying to return from beyond the fifth layer is a certain death sentence.

One day exploring the murky depths Riko stumbles upon a unconscious little boy, who turns out to actually be a Deceptively Human Robot. Upon awakening the robot turns out to have a meek, but friendly personality and suffering from severe memory loss, having no idea who he is, where he came from, and how he came to be where he was found. Riko befriends the robot and takes him under her wing, giving him the name "Reg", and brings him along to the surface. Not much later, a mysterious letter for Riko arrives from the far depths of the Abyss. The writer of said letter claims to be Riko's long lost mother, Lyza, a famously bold and hardy Cave Raider and explorer, telling her to come the to bottom of the fabled seventh layer of the Abyss, where she is waiting for her. Included in her letter are descriptions and drawings of beings found on the lower levels of the Abyss, which much to Reg's interest include a sketch of a figure who closely resembles himself. Compelled to find her mother, Riko then bids farewell to her friends and departs to the Abyss along with Reg in search for her mother, despite knowing of the risks and the fact that due to the Curse of the Abyss, she will never be able to return.

An anime adaptation by Kinema Citrus aired in Summer 2017, covering the first three volumes. Volume 4 and 5 were adapted in a feature film called Made in Abyss: Dawn of the Deep Soul, released on January 17, 2020. A second season (with the subtitle The Golden City of the Scorching Sun), as well as a video game by Spike Chunsoft, titled Made in Abyss: Binary Star Falling Into Darkness, have been announced for 2022. In January 2022, it was announced that the first season will air on Toonami.

The manga has very frequent graphic content and realistic body horror, so it is not recommended for the faint of heart or stomach and not for all audiences. That said, there's a huge payoff in action, mystery, and a unique fantasy for viewers to commit to. It's well known for being voted best anime of 2017 by the Crunchyroll awards.

Alternative Title(s): Made In Abyss