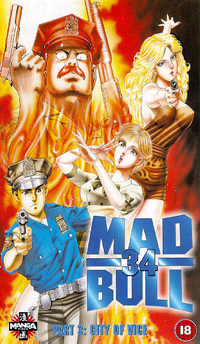 Mad Bull 34 was a manga published between 1986 and 1990 in the "Young Jump" magazine in Japan, then picked up again in 1999-2001 with a retconned plot. It revolved around fresh young rookie Daizaburo "Eddie" Ban being sent to New York's toughest precinct, the 34th. Here, he meets the man who's been assigned as his partner, John "Sleepy" Estes (aka "Mad Bull"). At first, the two couldn't be more different if they tried. Eddie is the more by-the-book type of cop, while the only book John probably uses would be promptly bludgeoned into the skull of some random perp, then followed up by half a mag of bullets. Yet, despite this, they eventually come to an understanding/mutual respect (much to the chagrin of their superiors) as they tackle a revolving door of increasingly over-the-top villains.

A series of OAVs by Magic Bus were released from 1990 up until 1992, and as you can imagine they're pretty violent. The anime unfortunately only represents four of the many stories of the manga. By the way, this series is by Kazuo Koike.

A DVD release of the series was announced for 2013