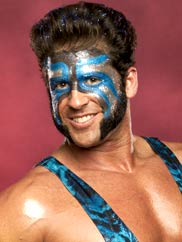 Americo Sebastiano "Rico" Constantino (born October 1, 1961) is an American Professional Wrestler from Las Vegas, NV best known for his time in WWE 2002-2004 as Rico. He started his career in 1998 in the Empire Wrestling Federation in Los Angeles in 1998 after an initial career in law enforcement and as a contestant on American Gladiators. He signed a developmental deal with WWE and was assigned to Ohio Valley Wrestling, where he would hold the OVW Heavyweight Title

once with the Prototype (John Cena). He was introduced to WWE on WWE SmackDown! in March 2002 as the stylist for the Ambiguously Gay team of Billy (Gunn) and Chuck (Palumbo). At WWE Judgment Day, he was forced to team with the Face Rikishi against Billy and Chuck, leading to he and Rikishi winning the WWE World Tag Team Titles

. However, Rico soon turned on Rikishi, enabling Billy and Chuck to regain the belts. He was moved to Raw in September as the manager for the Wild Samoan Tag Team Three Minute Warning (Rosey and Jamal [Umaga]). (Ironically, he'd gone from feuding with Rikishi to managing his cousin [Rosey] and brother [Jamal].) After Jackie Gayda returned from OVW, she became his valet on Raw until they were drafted to SmackDown!, where Rico started teaming with Charlie Haas. They would hold the WWE SmackDown! Tag Team Titles

before Rico was abruptly released in 2004. He would go on to compete for All Japan Pro Wrestling and hold the All Japan All Asia Tag Team Titles

with Bull Buchanan before retiring in 2005. (See He's Back! below, though.)