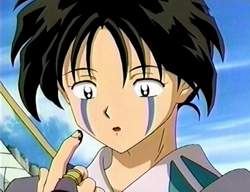 Gods, demons, high priestesses and almost any other variety of being more powerful than the usual schmoe in the street will be indicated by convenient facial markings, usually in the center of their forehead, on their cheeks, or both. These will often tell the perceptive viewer the owner's moral and ethical alignment (or lack thereof), their team affiliation, and maybe even their tax bracket. If their markings change when they use powers (or more power than they should), it's a Marked Change.

In many series, androids may have an obvious mark that allows humans to instantly identify them as a robot. Sometimes this is a functional item, as in Chobits (see Unusual Ears).

Sometimes, they might simply be tattoos that are rarely commented on, maybe hinted to be clan/regional markers.