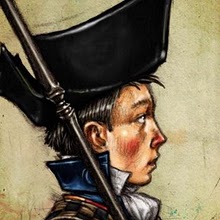 The boy with the girl's name.
Advertisement:

Combine Bio Punk and Dungeon Punk, mold it into a Coming-of-Age Story, layer in a lot of The Lord of the Rings-style world building, and frost it with lots of alchemy, and you'll have the Monster Blood Tattoo series.

Written and illustrated by D. M. Cornish, the first series is a trilogy following the bildungsroman of one Rossamund Bookchild: orphan, budding chemist, and reluctant adventurer, and his journey of self-discovery. Along the way he meets many people and many creatures, notably Europe, the Branden Rose, lightning-wielding monster-hunter and duchess-in-waiting of Naimes; Threnody of Herbroulesse, telepath, fellow lamplighter 'prentice, with a prickly exterior; and assorted monsters and nonhuman denizens of the wilds of the Half-Continent.

Other books and stories are planned in the series, obvious given the sheer scope of the world and the attention to detail and backstory present in the glossaries of each book. As of spring 2013 two new stories in one book are forthcoming, according to the author.

The Jim Henson Company has optioned the rights to create a film based on Cornish's world, but there has been no news since 2009. Any upcoming news relating to the series and much extra material can be found on David's blog, Monster Blog Tattoo

The series was renamed to The Foundling's Tale in North America, possibly because the Moral Guardians felt ill-at-ease with a title referencing tattoos (or blood) in a young adult novel.