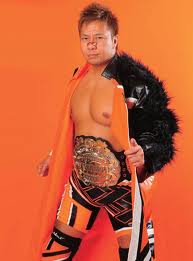 Satoshi Kojima (b. 1970) is a Japanese professional wrestler from Koto, Tokyo. Trained by Animal Hamaguchi in 1990, Kojima started his career in New Japan Pro-Wrestling dojo in February of 1991, debuting in his first match September of that year. In 1994, he won the Young Lions Cup without losing any of his matches. In 1998, Kojima joined nWo Japan where he first formed the long time Tag Team Tencozy (or TenKoji) with Hiroyoshi Tenzan.

In 2002, Kojima jumped ship to All Japan Pro Wrestling where he became Triple Crown Heavyweight Champion

twice. During his second reign, he beat Tenzan for the IWGP Heavyweight Championship

6 times (five times with Tenzan, once with Manabu Nanakishi), the All Japan's World Tag Team Championship

3 times (once each with Taiyō Kea, Kaz Hayashi and TARU), the All Asia Tag Team Championship

once (with Shiryu) and the NWA World Tag Team Championship