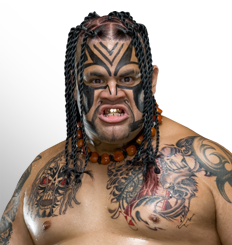 Edward Smith Fatu (March 28, 1973-December 5, 2009) was a Samoan-American Professional Wrestler best known for his work in WWE as Jamal and Umaga. He debuted in 1995 and competed in various independents and for FMW before he and his cousin Matt Anoai caught on with WWE and were assigned to the developmental leagues as the Island Boys, billed respectively as Ekmo and Kimo. Renamed Jamal and Rosey, they debuted in 2002 as enforcers for Raw General Manager Eric Bischoff as the team Three Minute Warning, with manager Rico. The team lasted until Fatu was released in 2003. He would go on to compete for All Japan Pro Wrestling, TNA, MLW and other promotions before returning to WWE in late 2005. He was reintroduced in 2006 as Umaga, a character closer to the Wild Samoan tradition originated by his uncles. He would hold the WWE Intercontinental Heavyweight Championship

twice before leaving in 2009. Sadly, he passed away at the age of 36 from a heart attack brought on by combining drugs.