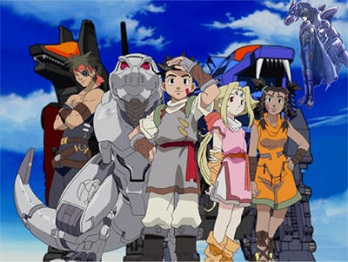 Left to right, Irvine, Zeke, Van, Fiona, and Moonbay. (Top right: Raven and Shadow)
"See you on the battlefield!"
— On The Next Episode Of Catchphrase
Advertisement:

Zoids: Chaotic Century is the first of the several Zoids anime, adapted from the manga of the same name. Known simply as Zoids in Japan, it was marketed as Zoids: Chaotic Century in English-language markets. Western fans occasionally use Chaotic Century to refer to the first half of the series, and Guardian Force to refer to the post-Time Skip second half, though this distinction was never officially made in Japan. It was played on Cartoon Network in North America, but moved to an early-morning timeslot before it finished airing, and eventually canceled entirely without ever showing the last four episodes of the series, which were delayed due to production issues. The Final Four were eventually aired — on Toonami no less — as a gift to the fans.

Chaotic Century's story follows Van Flyheight, a teenager who spends much of his time Hover Boarding around the local desert ruins for kicks. One day, he's pursued by a local bandit and forced to flee into said ruins, where he discovers a set of People Jars in a previously inaccessible part of the structure. In one, he finds a small and unusually intelligent dinosaur-like Zoid; from another emerges a young girl, who proves to have no memory of her past but experiences occasional visions of a mysterious nature. Van promptly names the girl Fiona (which she called herself when initially asked her name, but seemed to forget as soon as she said it) and the Zoid Zeke (after his father's Command Wolf). Zeke proves to have mysterious powers of his own when he instantly revives an old, abandoned Shield Liger, allowing Van to fight off the bandit and return home.

Between being pursued by bandits after Zeke, a valuable "Organoid", and Fiona's visions of a "Zoid Eve", Van Jumps At The Call and decides to go adventuring and see if he can find any answers about his new friends. Along the way he meets tough guy Irvine and mechanically-inclined transporter Moonbay, gets involved in the ongoing war between the Helic Republic and Guylos Empire, and gains a rival in Raven, a warrior for the Empire with an Organoid of his own. Before things can be put to rest, Van must learn about Fiona's past and how it relates to Zeke and the Sealed Evil in a Can that the Empire's Treacherous Advisor, Gunter Prozen, is trying to harness.

Guardian Force picks up after a Time Skip of several years, during which the Empire and the Republic have worked together to form an elite military group: the eponymous Guardian Force, dedicated to ending conflicts before they can become full-blown wars. Van, naturally, has joined on behalf of the Helic Republic; his Imperial counterpart is Thomas Schubaltz, who becomes his partner. The two of them, eventually joined by their friends from Chaotic Century, quickly uncover a plot that threatens the entire world. This time, the mystery revolves around Zoid Eve, and the emergence of several new villains, each with their own Organoid.