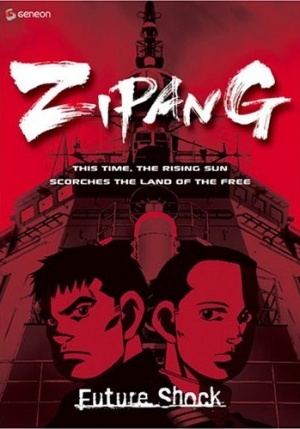 "A new country has taken shape in my mind. An independent island surrounded by the sea, and brimming with strength, is standing right before our eyes. Its name is Zipang."
Advertisement:

A modern JMSDF Aegis destroyer named the JDS Mirai travels through time back to the Battle of Midway . . . and the crew doing nothing. Fearing a Temporal Paradox, the ship's captain decides to stay as isolated as possible, while trying to figure out a way back home. This course of action does not go as planned, due largely to an Imperial Japanese Navy officer the executive officer rescues, who reads the contents of the ship's library - and thus learns the true nature of the war and what came after it.

Created by Kaiji Kawaguchi, who also wrote The Silent Service and A Spirit of the Sun, the manga ran from 2000 in the Weekly Morning (Shūkan Mōningu) Seinen manga anthology magazine, and wrapped up in 2009 with 43 volumes published. A 26-episode anime adaptation was aired in 2004 which adapts the first 70 chapters of the manga, and it was licensed by Geneon for distribution in North America.

Compare and contrast Zipang's events with the actions of the crew of the USS Nimitz in the 1980 movie The Final Countdown, where that ship was sent to Pearl Harbor (and rescued a senator from the time period, too).