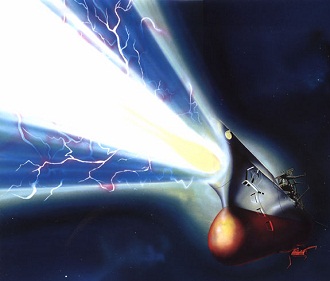 When you absolutely, positively got to kill every motherfucker in the galaxy, accept no substitutes.
"I have traveled far and seen much. Yet nothing warms my heart so much as the sight of a gun so massive that its fury makes the very world tremble."
— First Captain Lysander of the Imperial Fists, Warhammer 40,000
Advertisement:

The Cool Ship needs an equally cool weapon. If it's a sufficiently humongous Cool Ship, it will be equipped with a Laser Beam on steroids: the Wave Motion Gun — an enormous Ray Gun that fires a massive energy beam capable of blowing away an enemy ship (in the "blow a battleship in half" sense), sometimes an entire fleet, with one shot, and maybe even blowing up an entire planet. It doesn't necessarily have to even hit; if you're too close, the sheer energy bleeding off from the beam can be deadly. And don't even think about trying to waste your time with puny Deflector Shields — it'll just punch right through 'em.

Frequently, the Wave Motion Gun is made of Lost Technology, or is an experimental prototype, but sometimes they're a dime a dozen. It also explains how a small fleet can win consistently against enemies that grossly outnumber them: the defense units just have to hold their ground until the Gun(s) is ready to fire. Invariably, just before firing, The Captain has to order the attack.

Naturally, such Superweapons tend to have built in Power Limiters in universes where the power level of everything isn't cranked Up to Eleven. Wave Motion Guns usually require a significant charging period before firing and re-charging/cooldown afterwards (occasionally depicted by Sucking-In Lines; the Wave-Motion Tuning Fork is a popular subtrope used for visual effect). They can be Too Awesome to Use or Awesome, but Impractical. These weapons can often be the weaponized equivalent of a Dangerous Forbidden Technique, especially the most powerful varieties. Some require Explosive Overclocking of the power grid they're attached to, making them risky to use. Sometimes they draw so much power that everything else has to be shutdown to charge them. Others require ... unconventional ... power sources, or they may be a Nuclear Option with risks of heavy collateral damage.

This sort of weapon is frequently mounted on a Kill Sat and is likely to be fired using converging streams. If it's built into a famous real-world location, then it's a Weaponized Landmark. If the bad guys have one, it's a Death Ray. Can lead to Wave Motion Fun.note You might call that a Wave Motion Pun. When it's built into the ship so that it's always pointed straight forward, it's a Fixed Forward-Facing Weapon. Kamehame Hadoken is the equivalent of this trope for characters who utilize Ki Manipulation, Functional Magic, Supernatural Martial Arts, or some other form of superpower. For dragons, it's a Breath Weapon. Facing one of these on foot often involves a Corridor Cubbyhole Run.

See also There Is No Kill Like Overkill, Big, Bulky Bomb.