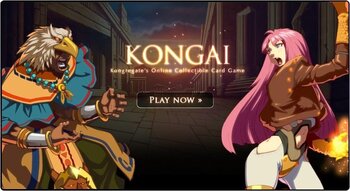 Kongai is an online Collectible Card Game designed by Street Fighter uber-nerd David Sirlin, with characters illustrated by Udon Entertainment, and is found exclusively on the Kongregate web site. The game is essentially a battle between two teams of three (or five, in some matches) different characters that can be mixed around at will. The amount of cards available started out as just four factions of five characters each (plus five similarly themed items), but has begun expanding to include four more factions of characters as well.

You can find the actual game here

When you start an account on Kongai, you can pick any three character cards from any faction and another three item cards to pair up with those characters. From there, you can use this hand to win more games (and a chance at winning a random card) or you can complete challenges in games posted elsewhere on Kongregate to easily win more free cards to open up more options for customization.

Unlike many other CCGs, Kongai tries to avoid giving richer players too much power by offering everyone the opportunity to pick from all the possible cards at the start (though there is an option to spend real money to acquire these cards anyway). However, you can only select randomly unless you happen to "own" the cards and make a customized deck with them.

At the start of the game, both players start off with 100 energy and whatever the maximum HP value is for the character they have. During the first turn, the player has to choose the distance to put their character: Close-range, long-range or just sit tight. Doing either of the first two options costs 50 energy, but may be necessary to move your character into position or handicap the enemy. Choosing the third option costs no energy, but if the enemy decides to move you will be at their mercy.

Once the distance has been set, the characters must then choose one of the following:

Once the attack phase has been resolved, the characters return to selecting the distance and the round begins anew. The gameplay continues until one side's characters are all dead and their opponent wins.

As far as metafiction is concerned, there isn't much of a story within the game, other than brief snippets attached to each faction suggesting that they all contain groups of powerful, ancient warriors who have decided to fight each other, just because.