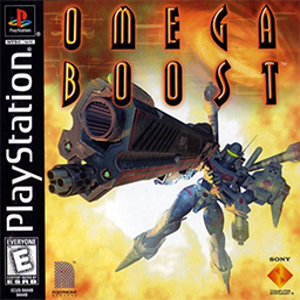 Your target is 1946: ENIAC, the first artificial intelligence.
The enemy has already activated the timeshaft.
Your mission is to prevent the AlphaCore from causing historical alteration.
Advertisement:

Omega Boost is a Mecha Rail Shooter developed by Polyphony Digital, released for the PlayStation in 1999.

Sometime in the past, an alien intelligence came into being inside "the Network", a vast sea of information constantly flowing in and out. Soon enough, the intelligence — AlphaCore or, as it calls itself, "it" — discovered other beings that existed outside "the Network": Humanity. "It" decided to help these people, without revealing "its" existence. Slowly and quietly, it aids humankind's technological development, all the while growing "its" own influence as well.

Eventually, humankind discovered "its" existence, and panicked. How could such an advanced intelligence not only exist right under their noses but be present in nearly every one of their systems? They retaliated and attempted to purge AlphaCore from "the Network", but failed. Enraged, AlphaCore seizes control of their defense systems and declares war on humanity.

This conflict endures for many years, with AlphaCore never losing its advantage, and slowly pushing humanity to the brink of extinction. Eventually, humanity devises a plan to destroy AlphaCore: Operation Omega. Travel back in time and disconnect AlphaCore from "the Network" before it has a chance to seize control of their technology.

Before they can put their plan into motion, AlphaCore steals the time machine they engineered, and creates a vacuum tube which houses a piece of its own consciousness, which it will then place into ENIAC, the world's first computer, ensuring its control over humanity and "the Network".

Desperate, humanity creates their most powerful weapon against AlphaCore: Productnoid Omega Boost, a giant robot which can pierce AlphaCore's defenses, use the time machine AlphaCore stole, and prevent it from altering history.

"Omega Boost, you're all set. Carry out the mission carefully."