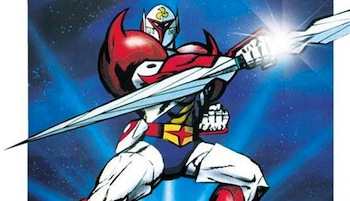 Tekkaman the Space Knight is an anime TV series produced by Tatsunoko Production. Set in the distant future of the 21st century, the Earth is polluted and nearly depleted of resources. Mankind is forced to find a new home which they dub "Second Earth". But just as they are set to launch the mission, the evil alien alliance known as the Waldastar attack to impede their efforts.

After his father is killed in the first Waldastar attack, Jouji Minami hijacks the highly advanced robot Pegas. Using the robot's built in "Tek-Set" system, he transforms into the armored Space Knight, Tekkaman. Together with his girlfriend Hiromi and the mysterious Andro Umeda, the three of them search for a new world while fending off the Waldarian menace.

Dubbed in English by William Winckler Productions, the series is better known in America for its almost Adam West-like tone than Japan's version.

In the early 1990s, a revamped version, Tekkaman Blade, was made. Tekkaman was also one of the featured characters in Tatsunoko vs. Capcom

The original series is legally available to watch on

Anime Sols, where you can also pledge money to keep the series afloat in the United States and Canada in exchange for physical goods, such as stickers, posters and DVD box sets. However, the first DVD box set was unable to meet its funding goal, and as a result, no further episodes are being uploaded.

Tropes exhibited by this series: