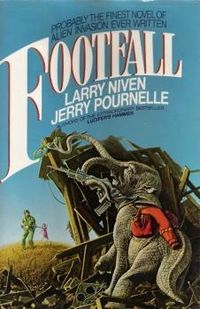 Written by Larry Niven and Jerry Pournelle, Footfall is an Alien Invasion novel with much more accurate science than usual. Set in a very hard universe, it almost serves as a Deconstruction and Reconstruction of the genre.

The story is set in a slightly alternate 90's period. The invading Fithp are herd animals resembling baby elephants, with bifurcated trunks that end in 8 tentacles. Their Generation Ship, Thuktun Flishithy ("Message Bearer"), coming most likely from a planet around Alpha Centauri, runs on an advanced Bussard ramjet, and their intent is to conquer Earth and subjugate the human race... yeah.

Their rather flawed plan is thoroughly deconstructed at various points throughout the novel, both by humans and by dissident fithp.