Literature / For the Win 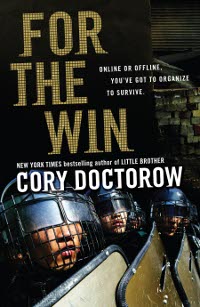 Gold. It's all about gold.

An undefined period into the future, World of Warcraft is ancient history. Eight of the 20 largest economies in the world are virtual, including three run by Coca-Cola. Nine million people — Chinese, Indian, Malay, Vietnamese, even some Americans — make their livings through them, including uncountable gold farmers. Whenever it's more fun to have virtual gold than to not have it, there'll be money to make by gathering it.

Just one thing: Most of that money isn't being made by the gold farmers themselves, the players who work 12 or 18 hours a shift for a pittance and know the games inside out, know exactly where and how to wring the most gold out of them. Most of the money goes to their bosses. Want better conditions? You're fired and replaced with someone else who wants your job. Try to strike out on your own? Your boss sends his goons.

These problems have been faced by laborers before, in the 20th century. The solution they came up with was unions. If one worker wants more money, he can be replaced. If all of them want more money, suddenly the boss's position is much more precarious. Of course, most of these workers are in countries without strong labor rights laws — some countries prohibit all unions. And there's the matter of globalization — if you unionize gold farmers in China, their bosses will just replace them with Indonesians; after all, the companies that own the games sell subscriptions around the world. Really, any job has the same problems, even the ones involving production of physical goods. They can be outsourced to anywhere factories can be built and container ships can be docked.

Funny thing about globalization, though: When it comes to MMOGs, it works both ways. If you're a union recruiter operating in Mushroom Kingdom, it makes no difference whether the workers are down the street or three thousand miles away. They're all in the same virtual worlds. Anywhere the bosses move the jobs, the recruiters can follow. And why stop at gold farmers? You could unionize Mechanical Turks, girls working in brick-and-mortar factories — everyone. But that'd take someone either very reckless or very, very clever...

Cory Doctorow's For the Win differs from his previous young adult novel, Little Brother, in the lack of a single protagonist providing the sole perspective. Instead, there are several viewpoint characters, including:

As always, the novel can be found on Doctorow's site for free

or in traditional bookstores and libraries.