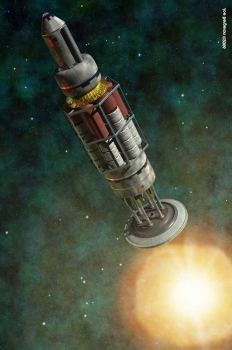 AKA "Ol' Boom-Boom".
"So the ship gets flung into the atmosphere by the nuclear explosion that just happened under it. Then what? It's going to start slowing down eventually, right? Well, you drop another nuke out of the concave (and heavily armored) bottom of the ship, and detonate it when it gets about 200 feet away. Rinse and repeat until you're in orbit. What could possibly go wrong?"
— Cracked, "5 Idiotic Space Travel Ideas (That Might Actually Work)"

When you get into space, you're going to need some kind of drive to make moving around easier. If you can't get Artificial Gravity to work your Reactionless Drive, perhaps you need to look at something simpler. Preferably with lots of explosions. You might consider implementing an Orion Drive,

an old project that was thought up during the Cold War. Explosive Propulsion meets nuclear weapons, you've got the potential to move much larger ships than normal. The researchers working on this project tended to include things like barber's chairs in their ship designs just to emphasize how much mass they could move.

A basic Orion Drive is composed of a Cool Ship, a large armor plate, and enough high yield weapons to set it in motion. They don't necessarily have to be nuclear, but they need to have the equivalent explosive power. A common variant is to have the explosive material be smaller pellets of frozen deuterium-tritium mix, which would then be induced into nuclear fusion by a laser; this is essentially an H-bomb without having to use an A-bomb to set it off. Note that such inertial confinement fusion propulsion systems are not properly termed Orion drives.

While this may all sound like madness, scale-model tests with conventional explosives have established that the design is perfectly workable. The main obstacle to actually building one of these is the logistics of lifting the components into orbit, since for reasons that probably need little elaboration, nuclear detonations inside the planet's atmosphere are deprecated these days.