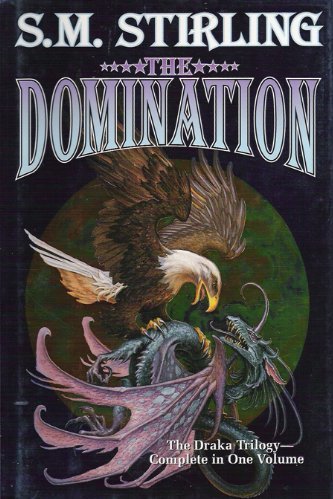 "The Draka will conquer the world for two reasons; because we must and because we can. And yet of the two forces the second is the greater; we do this because we choose to do it."
Advertisement:

"Gather 'round lads and lasses and we shall tell ye a story of a good republic and an evil empire where the bad guys are vanquished and truth, justice, and the American Way prevail."

of the Draka, an Evil Empire that doesn't intend to lose… ever.

The Draka timeline diverges from our own during The American Revolution, where American Crown Loyalists, due to the Dutch intervening in the war, are shipped to the new British Crown Colony of Drakia—named after Sir Francis Drake—on the southern coast of Africa. They are joined shortly by French Royalists, defeated Confederate troops, and generally the other losers of history. Burning with a desire for revenge, they founded the Domination of Draka: an Empire forged on conquest and slavery. Their goal is nothing less than world domination. Standing in their way is the United States of America and the Alliance for Democracy. And you just know this is going to be bloody.

The main trilogy consists of:

The Domination is an abridged omnibus of the main trilogy, not a separate book.